Doom 3 was originally developed by id Software and published by Activision in 2004. But it has since seen many ports and releases, with publishing coming from Bethesda Softworks. It’s been remastered and ported to many consoles, including PS4.

As part of a batch of new recruits, you find yourself on Mars, in a research facility that has one goal in mind. How to harness the power of teleportation and create new kinds of weapons using this technology. Except they manage to find themselves tearing a hole between dimensions. The other dimension that they find themselves opening? Hell. As a new recruit for the security division, suddenly you find yourself battling the hordes of hell as you try to find your way off of Mars, hopefully alive.

The story is surprisingly decent, given that this was the first time Doom ever tried a more story forward approach. With deep lore, gathered through PDA’s that you find littered through the research station. If you take the time to listen to some audio logs, or read text logs, you also end up learning a lot more about the station. The main story boils down to a basic “let’s get out of this hell hole alive”, but you find out that the station truly isn’t all that it’s cracked up to be. There’s lies and deceit and hidden secrets as to what they’re actually doing there. In the text logs, you find out that the higher ups lie to their benefactors to get more money to funnel towards the research that they’re actually doing. You learn about people who go insane, or the creaking of the station. There’s even some detailed reports of people who’ve returned from hell! 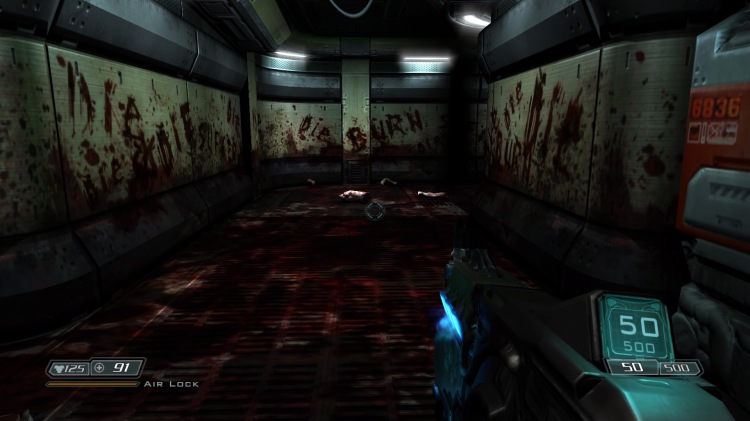 Of all the times I’ve actually played the game, this is truly the first time I ever paid attention to the logs. So I was surprised about how much I actually missed throughout the game. There’s even some giggles littered throughout the text logs too. My favourite was one talking about a website for adult clone activities. Or a reason why someone had so many viruses on their computer, and it was a work computer!

This version, just like the Ps3 version has the original expansion on it, called Resurrection Of Evil, which takes place a year after the events of the main game. They see you becoming another marine, who is back on Mars looking for a relic, to fully cut off the gateways of Hell. Though the lore wasn’t as deep in this, it also wasn’t very long either. Then you have the Lost Missions expansion, which is a new smaller campaign that takes place adjacent to the main campaign. Though it was very short and not as fleshed out, as either of the others, it still had the same fun gameplay!

If you’ve never actually played Doom 3, the game takes a very different approach from the first two. As those were very arcadey run and gun games, this instalment opted for a more horror feel. With dark corridors, and more horrendous enemy design, it was a very different approach that you either loved or hated. Though it’s not exactly survival horror, as you’re always stocked with ammo. I used a shotgun most of the game, and I never fell under 250 extra shells in my inventory.

The game is segmented into areas that are all a very linear experience. There’s no need to run to one side of a level, to find a red keycard, just to run back and open a door. Instead, doors are locked behind collecting PDAs of important people of the facility. This is never much of a hassle though, as the one corridor you go down, always has it at the end. You may have to backtrack a few rooms to get back to the door, but there’s always more demons to kill. What’s fun though is that you actually have to read some text logs or listen to audio logs to get the passcodes for some weapons rooms, or ammo lockers. Throughout the game, you get a plethora of weapons and a special item called “The Soul Cube”. When you kill enemies, it gets powered up. You can then use it to insta-kill the worst enemies you see and get health back. In the Resurrection Of Evil campaign, you get a weird demon heart that has the ability to slow time and make your weapons stronger, the further you progress. This is fuelled by the remnants of dead people scattered through the areas.

The worst thing about the controls are by far, how you sprint. To be able to sprint, you have to toggle it off and on. You then have a stamina bar which decreases. It’ll eventually refill when empty. But in later parts of the game, you’ll find yourself in Hell, which is customary to Doom games. Here you have an unlimited sprint. The only thing is, you have to instead hold the sprint button down, which you do by pushing in the left analogue stick. With no way to change this, I found myself barely bothering to swim for the last quarter of the game, and it made it feel like it took far longer than it needed to, only because the basic run speed is pretty slow honestly. Aside from that, the controls still feel pretty good.

Doom 3 is still a joy to play and still remains my favourite Doom. The horror atmosphere lends itself well to the twisted design of the demons, and it’s fun to learn about the crew of the research station. It sucks the controls are still a bit bad, and the extra campaigns are a bit hit and miss, but it’s still worth playing for any Doom or horror fan alike!