Heavy Fire: Red Shadow is a first person wave defense shooter that is developed by Anshar Studios and published by Mastiff. It was released in October 2018 for PC and Consoles.

When the tension between America and Korea starts bubbling over, they start pulling random operations against each other to try and get a leg up over the other. Before you know it, they’re in a weird technological war that also somehow includes you defending beaches and stuff as Sgt. Will, the faceless and voiceless character. 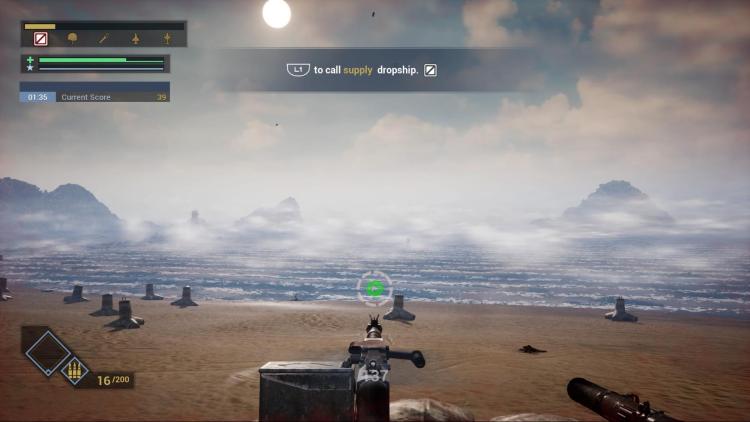 Well I say voiceless, but you hear his voice during the opening cutscene that plays EVERY TIME the game starts up, that you have to listen to for at least thirty seconds before you can skip it. Christ, I think I’d rather have a blank screen with a little loading circle in the corner, and then I see the reflection of myself and my utter disappointment. The story is just nonsensical “YEA AMERICA!” that is rehashed in so many things. Hell it can be told in about two minutes. It goes nowhere, it has nothing to it, and it was god awful. I wrote better stories when I was eight!

It felt like the writers took the barebones of any war book or movie and just boiled it down to be very basic and sold it. When compared to the other Heavy Fire games stories, this has nothing. Though not like they were the best either, there was something there at least! 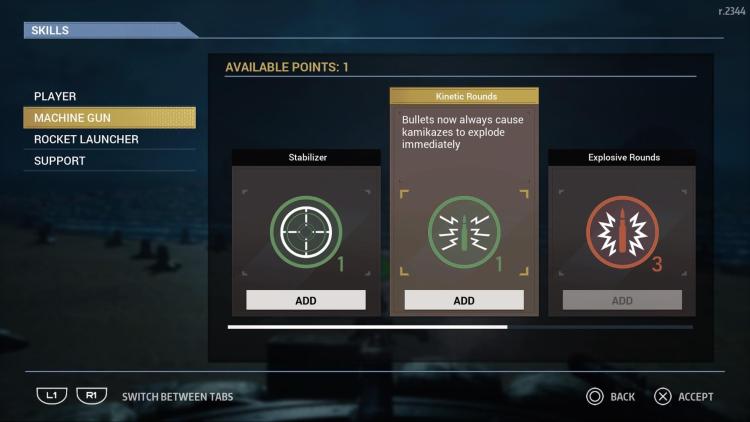 When it comes to the gameplay, it was so bland and boring. I expected an on-rails shooter like the previous games. Instead it was a stationary shooting gallery of wave defense. You sit in one spot and turn your turret 360° while shooting enemies. But 90% of the time they come from infront of you, or to the sides. The game got a bit fun when I started getting upgrades, like not having to reload my turret, or having explosive bullets, but even then it wore thin.

You get side missions you can do in the levels, which are just random pop ups. They range from killing enemies, getting headshots, blowing up vehicles, and if you do four of them, you get a quick little boost, like higher experience gain, or infinite rockets. What’s weird though is that if a wave ends, and you have a side mission, it instantly fails. I don’t see why, it makes no sense. The levels are long drawn out things too, taking about 15 to 20 minutes each time. Every four waves you get a little checkpoint, but I rarely died. Maybe two times in total throughout the whole game. When you kill enemies you also fill a bar to get assistance, like infantry or helicopters. The dumbest thing about it all, is that you can get supply drops, and this is the only way to get more rockets, but it’s not guaranteed. So if you get none, you have to fill the bar again and hope for the best.

The level design is atrocious, which isn’t a surprise considering you’re sitting stationary for 2-3 hours. There’s only four kinds of levels, and they don’t really have anything to do with the “story” going on. So you’re on a beach in the day, then afterwards, you’re on that beach at night. Oh look you’re in a shipping yard in the day, and now it’s night. It’s so ridiculous that you play the same level twice!

The VR option is also just a scam. This is sold as an extra add-on to the game. Luckily when I got it, it was on sale for a buck fifty, but I want that back! The headset does nothing. You can barely read the words on the screen because the resolution is so poor as well, which is a shock considering they boast about it being made in Unreal Engine. If you play on VR, you’ll need someone holding the PSVR cord for you so it doesn’t tangle around your ankles and you don’t break your face when you trip. In the game, all it does is turn the camera, which is weird considering you think you’d be able to control the turret too, but NOPE! You’re just standing there, holding the DualShock, and still needing to control it all normally. It’s so dumb!

I have a guilty pleasure for on rails shooters, so I bought this immediately when it was dirt cheap, not knowing it wasn’t like the old ones. I regret my decision. Sure I got a shred of fun when I had a helicopter killing guys while I’m blowing up their trucks, but other than that, there’s nothing. Stay far far away! Can I have a refund?