Agent Intercept is an on rails action game developed by indie studio PikPok and self-published as well. It saw a PC release in June 2021, then came to consoles in March 2022.

As the Agent, you become trained on how to use the super spy car known as “The Sceptre”. It’s your job to help take down the super criminal organisation known as CLAW, who are ruthless and are trying to take over the world! Now come, Agent, there’s evil schemes to stop.

The story takes place over a string of 15 missions, each only lasting a few minutes each, but each level is jam packed with crazy action, and slow motion and over the top stunts! Unfortunately with how short the levels are, the game itself is really short if you only stay for the story. Though it is a really enjoyable spy thriller that made me suddenly want to watch a lot of spy thriller movies. It just pulls it off amazingly well with deception and lies and a crazy villain who thinks they’re the smartest!

Unfortunately when you play, there is some dialogue in the levels that is drowned out because of how focused you get on the action, or the fact that the dialogue volume is nowhere near the levels of the music and sound effects. So I found myself turning down the other noises immediately so I could hear what was being said when the game wouldn’t transition to a cutscene. 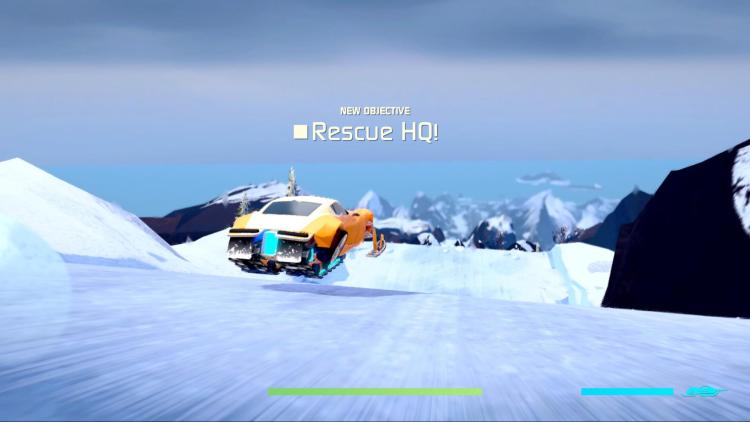 As much as you’re put in control of your car, you also have very little control as well. The game plays like an on rails shooter, in the sense that you don’t really get to control your movement. Like it or not, the car drives by itself. You get to steer left and right, and use boost to go a bit faster, or start a drift around corners, but even drifting for example, I felt like I had no real control over the car. This was a bit infuriating, especially when I was doing challenges for the levels that required me to pick up score collectibles or not run into other vehicles. Chances are, I would run into vehicles on a drift because again, I had no control over the car.

Even though I had no control, it was still a blast using this spy car, as it changed from a car, to a boat, to a snowmobile, it was amazing to see the creativity that the devs put into it. I enjoyed blasting enemies with all the super weapons I had at my arsenal when I got a weapons pick up, or just slamming into them and watching them careen off the road.

The game has a good amount of side content if you’re interested in it, though none of the side missions really have any story structure to them. They’re all broken up into regions, and they still follow around the agency taking out CLAW, but that’s about it. But they are all fun little distractions from the main story, all with their own series of challenges, just like the main story levels. Some of these challenges were easy, and some required some effort. Unfortunately a few of them took a lot of trial and error to get right, and unfortunately the internet had no information about them to help me out.

Once you beat a mission, you unlock its score attack modes. These are pure score attack, a target practice mode where you wait for targets to flip around and test your reflexes, and a time trial to see how fast you can get to the end of the course. These were all enjoyable in their own rights, but at the same time, they are the only three challenges available for EVERY LEVEL. On the brightside, when you beat a set of scores per level, you then unlock world leaderboards and these were always exciting to see where I placed amongst the handful of other players. I did place #1 in some challenges, and I’m curious as to whether or not I’ll ever get beaten.

For everything this game did right, it got another thing wrong. The story was exciting, but way too short. The car is fun to drive, but you don’t really have a lot of control. The score attacks are a fun way to rank against other players, but there’s only three kinds. But that doesn’t take away too much from the entire package and it’s definitely worth a play, especially if you ever played Spy Hunter.