Team Sonic Racing is a kart racing game developed by Sumo Digital and published by Sega. It was released to PC and Consoles in May 2019.

Sonic and his friends are enjoying life, living it up, when suddenly they all get mysterious invitations to a race track. Greeted by the mysterious tanooki, Dadon Pa, they are given race cars, and told to drive to win a special championship, and they all agree, because who doesn’t want to race their friends in awesome cars? So off they go!

The story is honestly very barebones here. You get a few lines of dialogue before each race or event during the story mode, depending on if it’s the main path or not, and it all boils down to the same two points. Either a rivalry talking shit about each other, or everyone throwing conspiracy theories out about Doctor Eggman, even when he’s not involved! I mean I guess it acts as a thin driving force for working your way through all of these races and such, but honestly I would have much rather a story about a silly friendly competition.

There is no motivation here, there is no grand answer to seek, and at the end of it all, it’s Sonic, so I feel like everyone just knows how it would end. Even when the story tries to ramp up to have a crazy twist, it’s just so dull and boring that it’s hard to pay attention. I mean I know it’s a racing game, and the story isn’t the main focus during these kinds of games, but a fun career mode just makes the entire package better.

When it comes to the racing, it’s all actually pretty tight, once I got used to it of course. When I first started I felt like it was too loose, but the more I played, the better it felt. The entire game you’re paired up with two AI, or if you have any friends in real life, unlike me, you can enjoy the split screen portion of the game, whether in the story or just random races where you make your own rules! You get a huge cast of characters to choose from, each with their own unique cars. I only ever truly used two though.

I have to say that being paired with AI constantly was the worst choice in the game, and there’s a few bad decisions here. First of all, every race requires you to either be first, be top three, or have your team’s points put you in first overall. Sort of like in Mario Kart, where once a race is done, you get points based on your positions in the race, going towards your totals. The AI were either really good, or couldn’t get themselves out of last place at all, killing any chance of me winning the races, making me restart. It didn’t help with some challenges that required me to always win a race, or pick up rings. With my teammates not beside me, I was at the mercy of the AI who were almost ALWAYS together, and the terrible item system which never gave me optimal items. Even when my team ultimate meter built up by giving my teammates items, or if they slingshotted around me from my boost trail, they’d use it immediately, as opposed to waiting until I hit the button, and just screw me over in the long run. 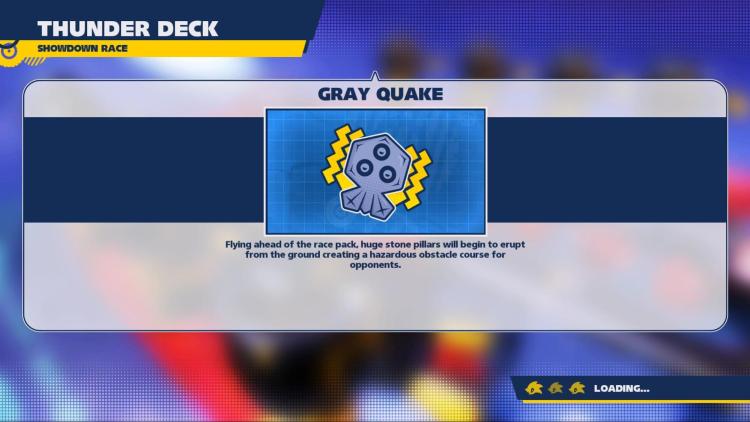 The speed of the game feels amazing on Expert difficulty if you unlock it by beating each level on Hard. Having to time your drifts, and getting extra air to do tricks to get a boost when I hit the ground was so sweet and exciting. I hated going back to Normal afterwards because I found it too slow. Even with upgraded cars, which you upgrade by using your gathered tokens at a ball machine. These tokens are gained at the end of every race, whether it’s online or not. The one weird thing about expert difficulty is that it was easier than Hard. I’m not sure why, but I wasn’t the only one who thought so. Even my friends who were playing alongside me agreed.

The last thing I will say is that some tracks are extremely overused. There’s only about 16 tracks so I understand you couldn’t do much for variety in the story, but after the 50th time through the Casino Pinball map, I didn’t want to see it anymore. Not even the events made it better, which ranged from grabbing rings, to drifting around poles, to destroying Eggman’s robots, nothing made them better. I enjoyed these events too because they tested your skills and it was exhilarating to get the best score, even if they made me rage at first when I was getting used to them.

For a kart racer, the game is really fun, but needing to rely on AI teammates to make progress really sucks and the courses are so overused they just get boring to drive through. It’s a fun time with friends whether you’re online or offline, but it can be an aggravating single player experience. Race with caution.