Garden Story is an isometric action game that was developed by indie studio Picogram. It was then published by Rose City Games for release on PC, Switch, and Xbox One in August 2021.

As little grape Concord, you’re all alone in a section of the Grove called the KinderGarden. One day, you’re called upon by Plum to leave the KinderGarden that you call home, and take up your role as a Guardian of the Grove, even if everyone is a little hesitant. Soon you find out about the rot that has slowly spread across the land and how it’s your task to help keep it at bay, just like every Guardian before you has done. But what if it’s not that easy?

The story is honestly a little slow throughout the journey, with a small little dose of a coming of age journey. With themes ranging from self doubt, and having to ask others for help, and never underestimating people just because they’re new to something. Though it is all very cute in the long run, it’s also filled with dread and a lot darker than I expected it to truly be, but it also felt a touch boring. I’d find myself zoning out during the story cutscenes and just sort of grabbing the basis of “bad things are bad, let’s stop it.”. But that’s probably more my fault than anything.

When I first started the game, I thought it was going to be a huge, sprawling adventure, with the map screen being a sprawling screen with a 31×31 grid. So I got ready for it. But in the end, the game ended up being smaller and more compact than I thought it was going to be. The game felt like a town building game, mixed with an action game. During the start of each in-game day, you get a series of requests that you can or can’t do, but if you do them, it helps the town that you’re in, by bringing in more items for you to purchase in stores, or by letting you find more resources around that specific area. Luckily for people who enjoy this mechanic, there’s more than one town in the game! In each town, there’s even a few side quests you can take part in. Usually boiling down to basic fetch quests, but they were fun to see the story of the characters unfold. Like one who needed help fixing items around town so they could go on vacation! 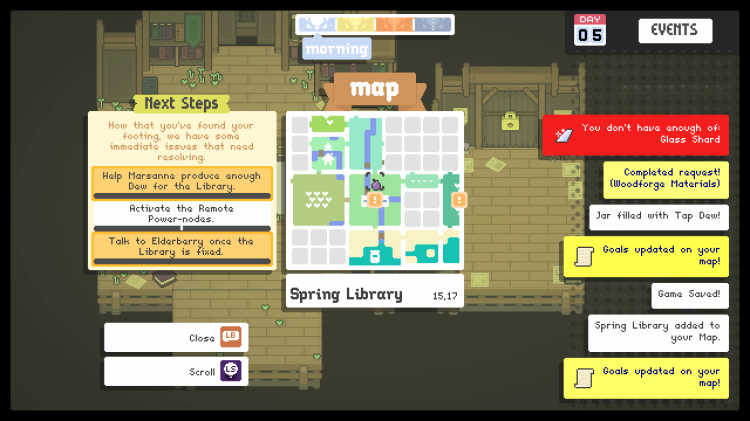 With more than one town in the game, this sort of brought in a series of its own headaches to deal with. As you progress in the game, you can take specific resources to a store and upgrade your items, but only the items you got in that town. So when I wanted to upgrade the weapons I used the most, I was running to each town to figure out what one had which upgrades. This was the same for upgrading my health flasks. Which I guess wasn’t as much of an issue, considering I had a bunch all at the same and I could switch whenever, so I had plenty of healing on me, so long as I always had them stocked. 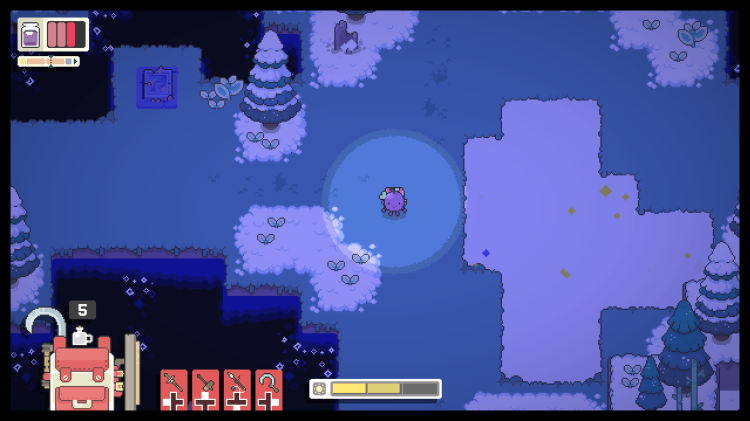 The combat was something that I expected to be a little smoother at the end of the day, but it felt like it blended too many things so it never had an identity of its own. It was slow, clunky, and the enemy movements made absolutely no sense, so it was a hit or miss on whether I’d get through the enemies without a scratch or not. You have a stamina bar, first and foremost, that depletes in chunks depending on if you roll, run, or attack. You can equip skills, called “memories” that can give you more stamina if you’d like, but they usually have a downside to them. So the whole game, I only had 3 stamina slots, which again, diminished if I did anything. So after three attacks, I’d have to run away and wait for it to replenish. It was so annoying for no reason. Or if I wanted to block, I’d need stamina, but yet blocking never affected your stamina bar. Even throwing your fishing rod required stamina, but not reeling in your catch. Why? 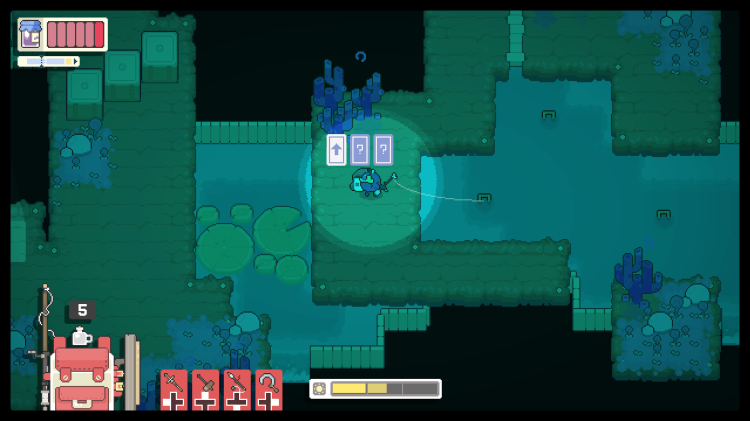 There were only a small handful of dungeons in the game, and this is where the gameplay annoyed me most. For as challenging and puzzling as they were, if you died in them, you started right back at the start. No matter what. So having to redo the same puzzles and encounters over and over got really annoying. Especially when you’re dying while learning the boss’s attacks. The weird thing about the bosses in the game, is that they all have a really small health pool in all honesty, but it’s still a marathon on trying to defeat them as you do 0-2 damage every attack, which really made them feel drawn out. But I loved the design of them all, figuring out when I could attack them, getting better and better until I could survive just long enough. I loved it. What I thought would be a laid back adventure actually had me putting in a good amount of effort. I just wish I had more reason to use every weapon in the game. 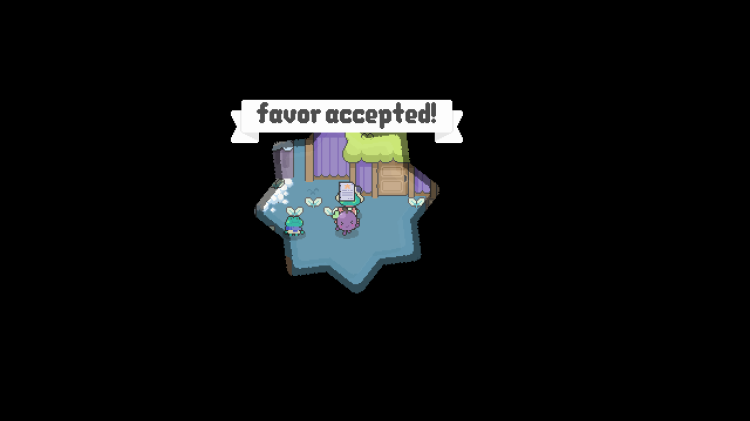 I went into the game expecting a cute and adorable relaxing game. But it was harder, darker, and a little more clunky than I expected it to be. It’s definitely a game that is worth a play if you want to play as a cute little grape in a world of fruit, but I wouldn’t necessarily go out of your way to play it. Plus don’t expect a chill experience! Prepare to maybe be broken somehow!