Bugsnax is a first person adventure game developed by indie studio Young Horses. It was released in November 2020 for PlayStation and PC. It then saw a release for Switch and XBox in April 2022.

You are an aspiring journalist, and you’re sent a video from an explorer to go to a place known as Snaktooth Island, where there’s mysteries around every corner, and Bugsnax! What are Bugsnax? They’re half bug and half snack of course! Have you ever wondered what a burger looks like when it hops around? Or a strawberry with feet? Have you ever imagined a pizza flying? Well now you can experience the magic on Snaktooth Island!

The whole basis of the story is that you are on Snaktooth to find the researcher who invited you there, Elizabert Megafig. She hasn’t been seen by anyone for two weeks, and neither has her life partner, Eggabell. So you get down to the nitty gritty and bring everyone back to camp, and interview them to learn clues about Elizabert. The game has a great cast of characters. From the old wise lady, Shelda, all the way to the shy and innocent Gramble. my favourite character though by far, was the mayor of the town, Filbo. He was the friendliest little guy, who always got back on his feet no matter what, and I just wanted to hug and squeeze him. 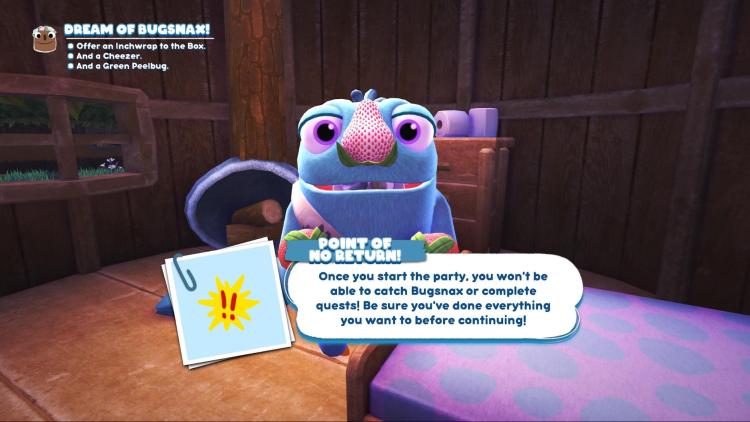 Though the story of the game isn’t extraordinary by any means, a lot of the characters’ personal stories were exciting to see. From learning Sheldas deep dark secret, to seeing Chandlo try to get stronger than he already is. I laughed a lot in all honesty. Everyone was lovable in their own way! Well almost everybody anyways. Then there is the DLC story that takes you to Brokentooth Island, the island of Bigsnax! Where the snax are bigger and better and no one knows why! Unfortunately I almost stopped playing due to how you get there. I skipped a few things in the game that I didn’t feel like doing. Like Sheldas side quests. But unfortunately I needed to play her quests to get to the DLC!

The DLC gives you a whole new area to explore. With new puzzles and about a dozen new bugs to catch. The one downside is that not all of the characters were included in it. Only a handful, and I only really liked one of them, which was Chandlo. So seeing him grow more as a character was fun for me, but the others were just there. I didn’t care for their stories, or their motivations in this little story. The new way to catch the bugs though included shrinking them down with a magic dust and then snatching them up once you can!

When I went in to the game, I had no idea what the game was going to be. I expected a 3D platformer with silliness galore. But this is what happens when you go in completely blind. What I found was a puzzle game. One that deeply frustrated me and really drew me out of the experience. The premise is simple. You catch bugs and feed them to your friends, thus transforming their body into a piece of food. This was fun, as you could mix and match good items to make the characters look absolutely ridiculous. So they’d have french fry arms, a strawberry haircut, pretzel ears, and pickles for teeth. It was the funniest thing. 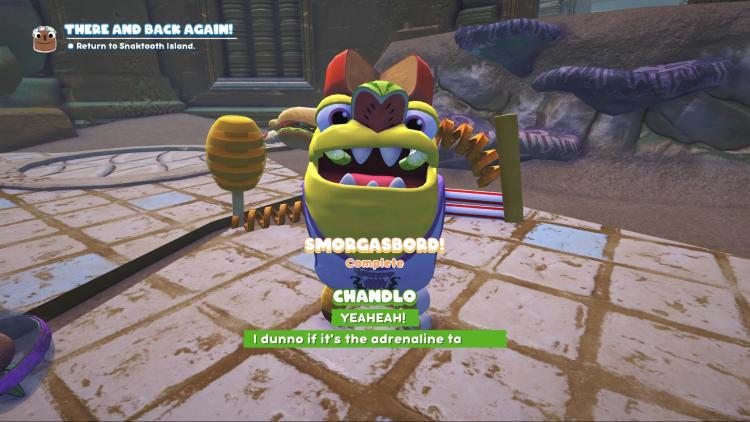 The downside is trying to catch the bugs. You’re given a variety of tools through our adventure. The most important tool though, being your Trap. This is what locks the bugs in until you pick it up, but the issue lies in the fact that it never gets better. So if a bug can’t be caught because it’s too aggressive, or on fire, or even freezing, you have to figure out an entirely new way to catch it. Some of them were obvious, others I just could not figure it out. Or while trying to catch one bug, I had an aggressive bug throwing me around the whole time! It made me frustrated.

Luckily the one time I got super stuck, I was able to pull up a hint card from the PS5 menu to figure out what to do. But outside of just catching bugs, there’s not much to the gameplay loop. It felt a bit underwhelming. There wasn’t really any platforming other than figuring out how to use your gadgets to launch yourself to a ledge. I wanted more from it at the end of the day.

As much as I loved the characters, the bugs and the premise behind the game, the story felt lacklustre. The side stories for each of the characters were amazing, and I wish the main story hit as hard. But the end was strange. I do wish the gameplay was also a touch better. But just know if you ever play this, it is a puzzle game at heart! BUNGER!