I Am Fish is a physics based adventure game, developed by indie studio Bossa Studios. It was published by Curve Digital and released on consoles and PC in September 2021.

One day there’s a little goldfish, swimming along and he gets caught in a net and dropped off at a pet store. In the pet store he meets three other fishy friends. A Pufferfish, a Piranha and a Flying Fish. Unfortunately they all eventually get separated and sold to different folks. But they vowed to meet up in the ocean one day, and that day has finally come!

There’s a few little story sections in the game. Mostly at the beginning and end of each fish story. You see where they ended up and how all they dream about is being among friends. They then see the signal to go to the ocean and off they go. Then you see the celebration when they make it to the ocean, and that’s basically it. The game isn’t about story, more about the silly and down right brutal gameplay.

The game starts easy enough. Playing as a goldfish, rolling around in a round fish bowl, as you make your way to the other side of the level. With many branching paths associated with some. Scattered throughout are pieces of bread that you can get as collectibles, but some of them are insanely difficult! There’s even times you can try and beat in some levels that seem to be extra intense. I finished a level, and thought I had finished fast enough to earn myself a 5 star rating. But after finishing in 10 minutes, I only managed a 3 star rating. So heaven help the people who are completionists! Some levels took me a ridiculously long time, with a whole lot of deaths too. Like one that took me an hour and 59 deaths! Sometimes jumping out of water just didn’t work like you wanted it to, or it would absolutely over shoot you, making some precision sections even worse.

If you play this game, you will die. A lot. Over and over. By far the hardest part of the game is playing as the Flying Fish. Mostly because you have to jump out of water and fly to a lot of spots obviously. But some are so pinpoint in where you need to land, even with moving platforms that it feels like a crap shoot most of the time. There was one level in the Flying Fishes story though that I messed up, so I had to unfortunately restart the entire level. On my second run, the object that I needed to move got stuck on a piece of debris that made its way over to it, thus making me restart again. There is a handy feature though that lets you move onto the next checkpoint if you’re struggling too hard. But then you wouldn’t really be able to see the whole level. 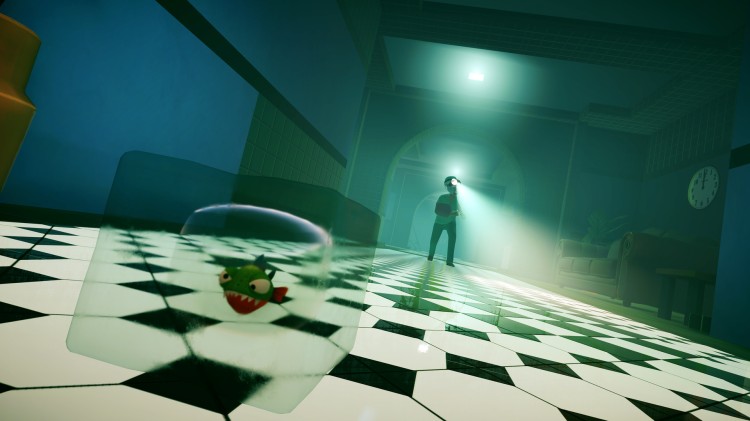 If I had to pick my favourite fish though, it was easily the Pufferfish, considering when you play as it, there are a lot of downhill sections. So you get to puff up and roll around like a ball. But of course because you’re a fish, you have to get to the next point of water before you suffocate. But I never felt stressed or angry while playing these parts. It was just stupid fun rolling around as a Pufferfish.

As for the controls though. They are… slippery and sometimes down right aggravating. There are parts in the game where you end up in certain objects. Jars, mop buckets, suitcases. The jars though have got to be the worst part of the game. You turn the jar by turning into the corners of it. So if you want to make it roll to the left, you either swim into the top right corner, or the bottom left. Except this really makes it shoot off at that angle like crazy. There was a part where I had to roll a jar down a rooftop and I died a good 36 times, just to get down this one ramp. As I’d try to turn, and it would shoot me off the ledge. Or I wouldn’t turn enough because I’m being careful, and it would shoot me off the ledge. So I wanted to scream a lot. Needless to say this game isn’t for the faint of heart. Was it exciting to get past all of the challenges the game threw at me? Yes it was. 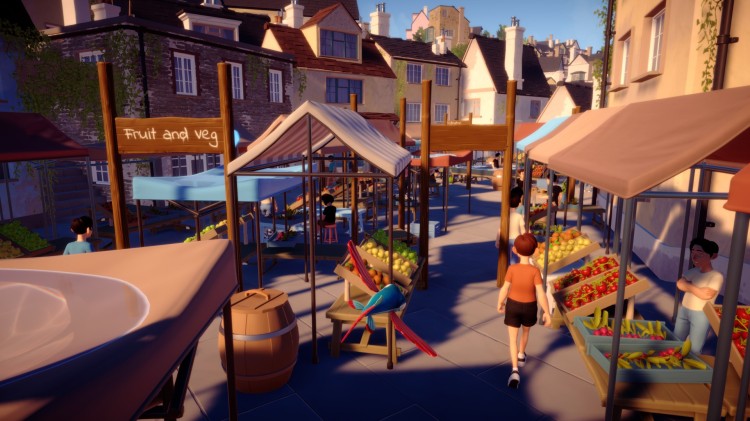 I will say though that the game seemed to have some performance issues and graphical problems. There were muddied textures everywhere. There were some spots that I needed to go to that didn’t even look like they had water, and there were a handful of times where suddenly the game’s framerate would drop and stutter like crazy, when I’m just swimming in the water with nothing around me. Even in some cutscenes it stuttered along. Now I’m not one to care about framerate, but when you have these very obvious drops, it starts to become an issue. Especially when this game requires pinpoint accuracy in some events, and that can really screw you over.

This game was a fun day of silly levels and a fun concept about friendship. But at the same time the controls and the precisions of some stuff is just downright infuriating. Especially the Flying Fish levels. I wouldn’t have been sad if I got more time as the Pufferfish. Did I enjoy overcoming the challenges. Yes I did, as I said, but I’m not sure I’d recommend this game to anyone unless they wanted a challenge. Though I guess challenging games are what Bossa Studios are known for.

I Am Fish – O-fish-al Reveal Trailer