Cthulhu Saves Christmas was developed by Zeboyd Games, and was released for PC and Switch in 2019 and 2020 respectively!

Twas the night before Christmas, and all through the house, not a creature was stirring, not even a…Cthulhu? Cthulhu was laying in his crypt or tomb, and he got himself a nice special present from Ol’ Saint Nick! Too bad he didn’t know that it wasn’t from the jolly man himself, and before he knows it, he’s lost all of the power that has made him a fearsome monster! So he swears his revenge and sets out to find Santa, and kill him once and for all!

Or at least that’s what he wants to do. This game has some very silly and witty story telling devices. The dialogue is hilarious and very fourth wall breaking. Where a lot of the time it’s done, it’s not done well. But this game doesn’t take itself seriously at all, so that makes it even better. There is a narrator in the game that Cthulhu fights with the whole time. But whatever the Narrator says, goes! So one time he was saying that Cthulhu had to go to bed, but Cthulhu said no, so he said “suddenly Cthulhu is tired and goes to bed!” and then Cthulhu ends up in bed and sleeping. It was a simple silly dialogue interaction that left me laughing real hard for a good minute. 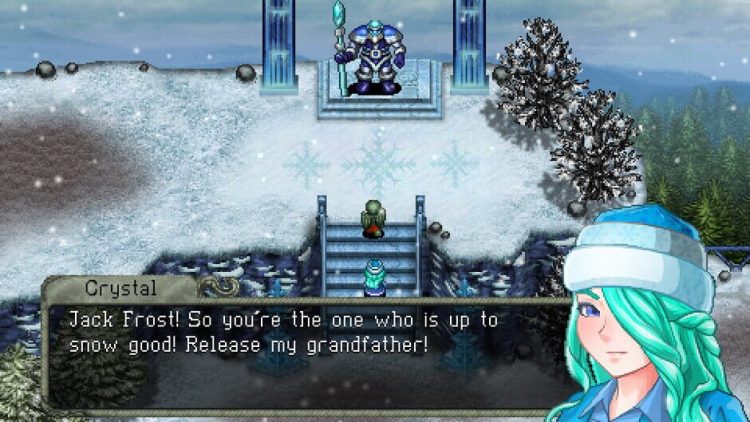 Between dungeons though, you find a few teammates who want to help you save Christmas…I mean kill Santa, all for their own reasons. So after each dungeon you’re sent back to a town, where the game takes a Persona like approach. If you’ve never played Persona, then let me explain it. You have a few days between dungeons, to “explore” the town and see some side stories. Each action takes up a day, so you have to really decide what you want to do. After each one though, you get a piece of equipment. So you can do them, based on equipment, or you can just do them because they sound silly! Like I had Cthulhu go to the movies until there was nothing left to see, and it was so worth it, just for the dialogue. This honestly gives the game so much replay value if you want to see every thing of dialogue, which, I’m not gonna lie, I will replay it in the future, just so I can see all the different choices, because these were the best parts of the game! Heck, there’s even references to the developers other games, like Cthulhu Saves The World, and Cosmic Star Heroine! 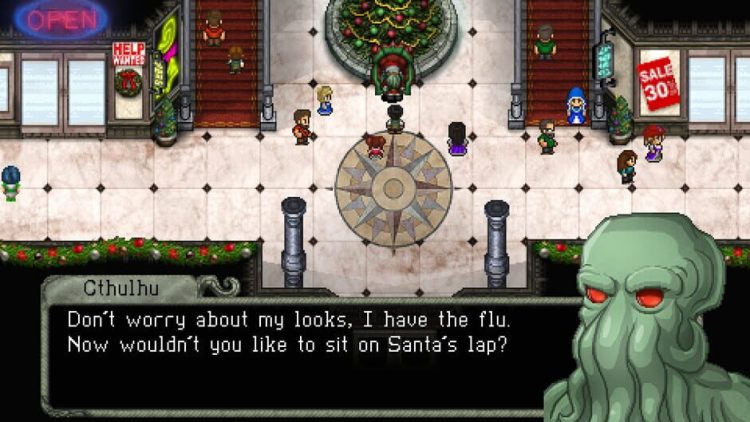 As for the gameplay, I found this to be the worst part. Not because it was hard, not because it was a turn based game, because that’s one of the reasons I bought it. But because of how the game works. Basically you select the move you want to do, and then it’s gone, until you “guard” to replenish your attacks. Out of the 8 options, one being the guard, you have 7 attacks. You get to customize the top row of your attacks. So not all of them have to be attacks necessarily. Some can be buffs, or healing, or even status effects to the enemies! Then the lower 3 skills are all randomized from the skills you have unlocked. Sometimes they are really great! Other times they felt useless. So the battles half felt the same. Though the game has a “hyper” system, where every time it’s a character’s turn, a little square under their health fills. When they’re all filled, they’re in “hyper” mode, which makes your attacks more powerful, or changes a skills attack pattern. So what would hit a row of enemies, now hits all the enemies. But that only lasted for that one turn! 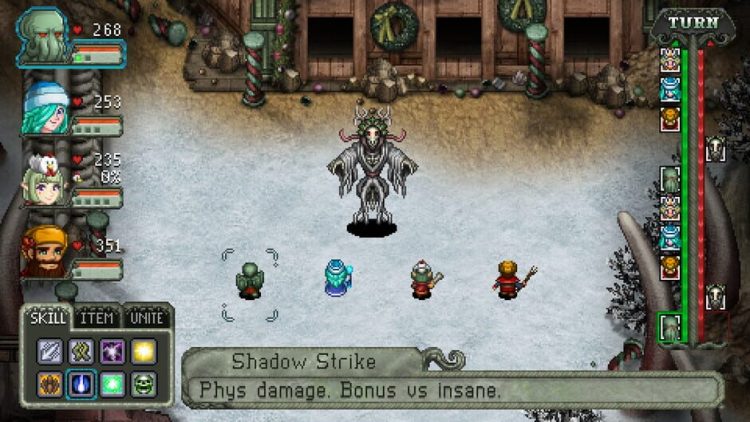 The battles themselves are random encounters, but there is one thing I really enjoyed about the game. Each dungeon has a certain amount of battles you basically have to fight. So if a dungeon has 10 battles, you can enter the menu, and start a battle whenever you want. After 10 battles, you can then freely roam around the dungeons, exploring without any battles happening! Unless you go to the menu and start them yourself. I did this for every single dungeon! So then I had the chance to just explore the dungeon, all relaxed, until I hit the boss!

Though the bosses weren’t too difficult, I could’ve half made them more difficult. There is a difficulty setting you can change whenever you want in the game. I started off on easy. Then I found the game to just be way too easy. So I then switched it to normal. Which unfortunately made the battles just drag on forever! So I did some experimenting, and found out, then the only real thing the difficulty does, it raises the enemies HP amounts! It seemed I was getting hit for the same amount, dealing out the same amount, it was just taking twice as long to finish a battle. While I was finding all this out, I fell asleep out of boredom! So it seems like a lame way to make a game more “difficult”. 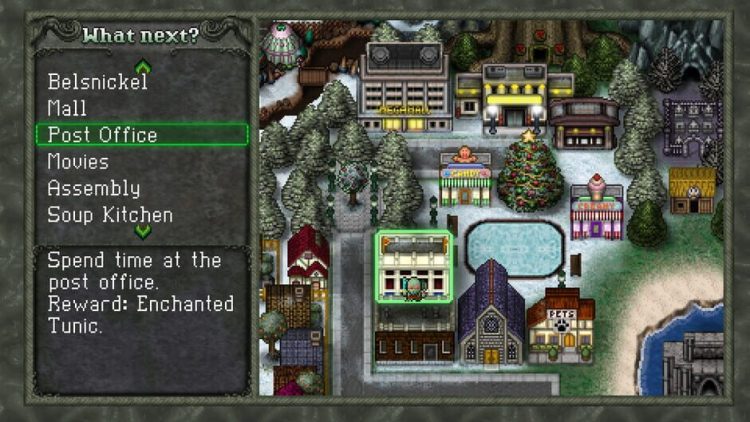 Now on the flipside of all the bad, are the other bits of good! The game is a clear homage to 16-Bit RPGs. So you have your sprites, and your chiptune music, and it all fits perfectly well. The developer has the old school formula down flat when it comes to look and feel, and it excites me so much. Considering a lot of developers can never seem to find the balance. Some either over do it, or under serve it all. So if there is more Cthulhu, I will be coming back! Though I will say, the game was a bit too short. I wanted so much more by the time it was done. But at the same time, it does well with not overstaying its welcome.

Cthulhu Saves Christmas is an amazing and hilarious RPG that is an homage to old school. The cast of characters are well written, the side stories are silly, and the narrator himself just takes the cake when it comes to storytelling.

Though I felt a bit unimpressed with the battle system and difficulty settings, some may love the way it works. So I can’t tell you to avoid this game because of that. If anything, just prepare some coffee, just in case you find yourself dozing off. This game is well worth every penny, and then some!