Trigger Witch was developed by the indie studio Rainbite, and was released on July 28th 2021. It’s a twin stick shooter that is an homage to Zelda!

*Disclaimer: A free code was provided by the publisher for the intent of this review. This does not affect my opinions, as they are mine and mine alone!

The world is filled with Witches, who have lost all ability to do magic. On the other side of their world, live the Goblins. The two sides have been cut off from each other since the mysterious “Ordnance Rift” appeared, and the Witches decided to hoard it’s “gifts” for themselves. You play as Colette who is attempting The Trial to be accepted into the peacekeeping committee known as “The Clip”. But something happens when you get your gift from the rift. You hear a man, but chalk it up to being hit in the face with a revolver, and it making you delirious! Then you’re off on your adventure to slay woodland creatures and protect the land!

The story winds up being a silly little adventure. You follow up on reports of odd things happening in the land. You meet characters along the way, and see what your fellow friends are doing after they attempted The Trial, and even make your way to lands you wouldn’t even expect. The locales are all fun to run around, and nothing ever feels too big either! Plus the villain of the game and the big twist just made me laugh. So by some point, the game doesn’t take itself too seriously, and that’s what makes it even better! You even get to make dialogue choices throughout the story. Although the only thing is that at the time of writing this, it’s hard to see which dialogue choice you have selected. One slightly raises, while the other doesn’t. Though they do have plans to try and patch in an arrow to see what you’re about to choose.

But the bread and butter of this game is its gameplay. A super fun, twin stick shooter, with Zelda elements all over the place! There’s caves to explore, dungeons to spelunk as you work your way through puzzles and bosses, and there’s an arena so you can see how long you can survive before you die! Plus there’s plenty of weapons to kill everything in your sight! From revolvers to grenade launchers to an LMG that offers you a boatload of bullets if you fully upgrade it! It was so fun to play around with every gun to see which ones were my favourite. Plus as you explore the lands, you get “Weapon Parts” to unlock upgrades for your guns. You then used gems, dropped by enemies to buy these upgrades! Plus if you get a new gun and decide you don’t want to use that fully upgraded Uzi anymore? You can get literally every cent back that you spent on it! That is a big plus in my books. The only upgrade I wish was available was accuracy. The reason for that is because the Uzi weapons felt so inaccurate, that when I got the trophy related to them, I never used them again. Though I will say, it’s awesome to not have to find ammo, as all of your weapons will automatically regenerate their ammo over time when you deplete them. Except for the revolver, which has unlimited ammo all the time technically. 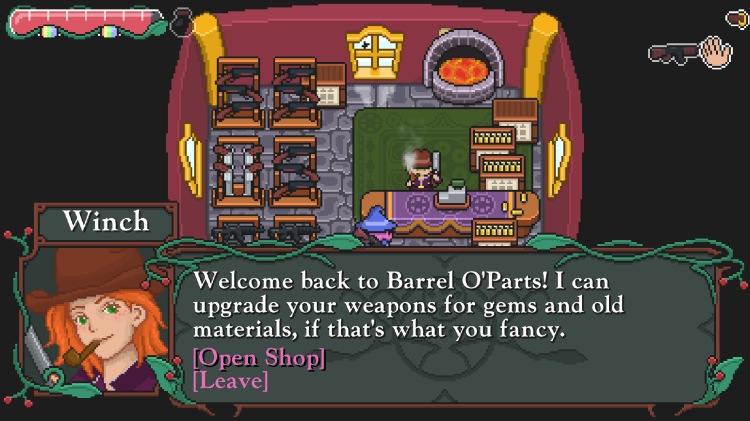 The dungeons themselves felt fun to explore in, as you end up in quite a few unique ones. For one you end up in a mine, and have to help out miners that are trapped. In another, you’re in an ice palace that has some areas blocked off until you find the flamethrower that’s hidden away, then you can melt the blocks. Most of the dungeons also have an enemy that requires the dungeon acquired gun to kill, or at least kill easier. Then at the end of every dungeon, is a boss fight. What a surprise! I know! Some of them, you just shoot them until they’re dead. But others, you have to attack a certain portion of their body, for them to show their weak point. This was also made all the more easier in co-op mode, as you have twice the firepower! So some fights that took me a minute or two playing solo, me and my friend crushed in a matter of seconds! 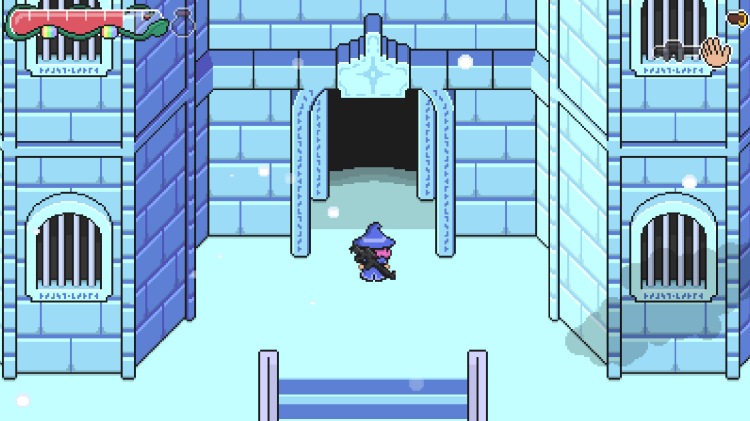 That’s the other excellent thing about this game too, is that you can play the ENTIRE thing in co-op. Sure it’s only local co-op, but for all we know there will be an update in the future that adds multiplayer! Plus running around in the arena in the game, seeing how long I could survive with a friend before we died, was so fun! I’m not a fan of arena based stuff in games, but this game nailed it, considering you can do it once, then literally never again if you don’t want to. But it was great for getting gems to upgrade guns.

Then I have to talk about Pinata Mode. This is an alternative to having blood in the game, if say you’re playing with a child, or you get squeamish with how much blood gets blown around after you decimate your enemies. So when they die, they release candy instead! I played a whole playthrough with blood and Pinata Mode, and I loved them both. One was gory and awesome if you’re a fan of carnage, and the other was silly and a unique twist.

If you’re a fan of Twin-Stick Shooters, especially in coop, I cannot recommend this enough! There’s guns, and gore galore, with the added bonus of Pinata Mode.
The dungeons are fun and the game has such a great Zelda feel that I can’t recommend it enough!

I do wish there was an accuracy upgrade for some guns though, as it made some hard to use without, but some may love seeing the bullets fly everywhere. Just buy it now. Don’t even think!